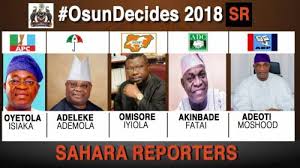 Nigeria Security and Civil Defence Corps ( NSCDC), Osun State Command has charged political gladiators across party divide in Osun State to work towards ensuring the Governorship election in the state holds under a peaceful, crisis and violence free and fair atmosphere devoid of killings, electoral violence and blood letting.

This advice to Osun political stakeholders was at the instance of the NSCDC Summit on violence free poll held in the state capital, Osogbo.

The Assistant Commandant General of the Corps ( ACG) Adeyinka Fasiu, who is the Zonal Commander of Zone J, who spoke at the Summit said the election would be free , fair and violence free provided the gladiators are ready to play by the fair rules of the game.

Osun State Governorship election coming up in few weeks will pitch the All Progressives Congress ( APC) candidate and the inumbent Governor of the State, Gboyega Oyetola against his poll rival , Senator Ademola Adeleke of the Peoples Democratic Party, PDP as well as Governorship candidates of other parties in the state.