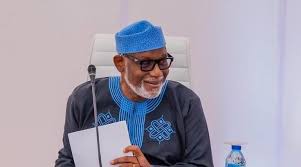 The Ondo State Governor and Chairman of the Southern Governors Forum,  Mr Rotimi Akeredolu, has applauded the Northern Governors Forum and Northern Traditional Rulers Council’s call for the immediate establishment of state police to address the continued insecurity challenges in the country.

Akeredolu, who has been calling for the establishment of state police said the decision to support the call for constitutional amendment to reflect the current realities could not have come at a better time than this moment when the confidence in the capacity of the Federal Government to secure the country appears shaky.

This was contained in a statement he personally issued through his Chief Press Secretary, Mr Richard Olatunde, on Monday.

According to the governor, “All patriots must salute the courage of the 19 Northern Governors and the Northern Traditional Rulers Council for their stance at this crucial moment in the country.”

The statement read, “We, on our part at the Southern Governors Forum have continued to reiterate the fact of the incongruity inherent in an arrangement which purports to be federal, nominally, but whose observances stand at variance with the best practices espoused by climes considered advanced and progressing, amenable to nuances and adaptations which reflect and accommodate the yearnings for inclusion of the component units.

“We will continue to insist on the creation of state police as the only logical and pragmatic solution to the pervasive problem of insecurity in the land.