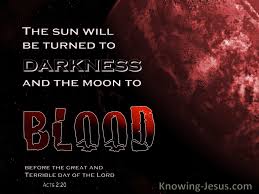 Blood on the Day of Pentecost .

The Day of Pentecost is a peculiar day in Christiandom . It is preceded by The Day of Ascension , in which the once brutalised and scourged Jesus, the saviour of mankind and the son of God rose to heaven where he has gone ahead of mankind to prepare for the believers, eternal paradise.

In orthodox churches , remembrance of The Day of Pentecost is marked with special masses and in most cases , a Holy Communion Service.

The parishioners at St Francis Xavier , Owa – Luwa , behind the Olowo’s palace , Owo couldn’t have bargained for a blast on Sunday, the 5th June, 2022. Yes, on The Day of Pentecost in Apostle Paul’s account, the holy spirit descended and the believers in The Upper Room spoke in new tongue . The descent of the spirit and the seizure must have eased in like a bang, but it united the body of Christ and not blast them to pieces.

The bandits, should we even call them that ? Government is yet to brand Fulani herdsmen a security threat to national cohabitation , thus it is safer to identify them as unknown herders, Gunmen or bandits! Pray, who is deceiving who?

But I digress. Revd. Father Abayomi was few minutes to saying the grace and ending the epochal mass on The Day of Pentecost , when the senseless killers turned it to a historical mass with their weapon of death and destruction.

They first and foremost detonated explosive devices which rigged the structure of the church shaking The Sanctuary to its foundation. Having allowed the bombing to cause a good amount of confusion, they moved in , in cult like fashion, shooting to death in close range Christian believers, armless and innocent Nigerians , whose right to worship their maker is enshrined and protected in the secular constitution of Nigeria.

Like all cowards who are blind to logic and reasoning, they faded into the thin air as soon as they felt they have instituted enough havoc. They left in their trail , blood, death and the killing of both adults and minors.

And a holy Sabbath with the remembrance of the Pentecost and the fulfilment of this sacred promise of a divine pacifier was fouled by terrorists.

How did we get to this sorry past? Is there a failure of intelligence somewhere ? Can it be taken for granted that it is unknown to the security architecture of this great nation that the Southwest has been infiltrated? Could it be that those who should know are paying lip service to the peoples welfare? For sometime now, Molege, Arimogija, Ikaro, Okeluse , Ifon and the entire axis bordering Benin on that end have not been safe to residents and passers-by. Dr. Abiola Oshodi, Nigerian born Canadian based Medical expert , who hailed from Owo had called attention to the terrorist activities going on in the axis mentioned ; what have the security of the nation done?

The forests are not safe anymore for forestry business as criminal Herders have claimed Landlord of the thick forests which have become their hideouts and ransom Haven; Reserves now reserved for criminals from where they penetrate the neighbouring communities , stealing people away for economic gains.

It is good that everybody that is somebody of means has railed against the bloody Sunday at St Francis , Owo. It must not stop at railing, raising of voices and bandying condolences! Particularly for Federal Government , the behemoth in the central has a lot of job to do. Call it any name, fact is, it is high time the centrist policing structure of Nigeria was unbundled . The demanding beat of securing this country demands that government thinks outside the box. The rhetorics of promises of a prevention of the attack next time is reassuring , nevertheless, government must move beyond rhetorics !
Who are the bandits! Where are the sophisticated herdsmen ? Are they not in our midst? Do we not see them everyday? Do they not rustle our farmands in a threatening show of bravado? When they are reported , what has government done? Is it not the same Federal Government that had dusted up the ancient edict to conjure up Grazing route for Herders ? Who is deceiving who? These criminal elements masquerading as herdsmen as if Herders had not been with us as long as we can remember are new breed gangs with territorial expansion as their singular motivational tendency. And they are testing the ground.

They have invaded the House of The House of the Lord on a holy day and have desecrated the holy of the holies. They are resolute and daring and have brought their fight to The Lord by wasting his followers.

The faithful are admonished to turn the other cheek when they are slapped ; now this is not slapping but bombing and close range shots at people whose only crime was going to worship The Lord their God.

This too shall pass! But the pains , the blood shed , the loss and the anguish shall remain in our memory of how some Nigerians misled by outright indoctrination came visiting our brethren with Death on The Day of Pentecost.

As law abiding Nigerians , the Christian fold in this country are seeking justice ; justice for the blood of the over 70 worshippers killed in cold blood at Owo.

Federal Government has its job well cut out!