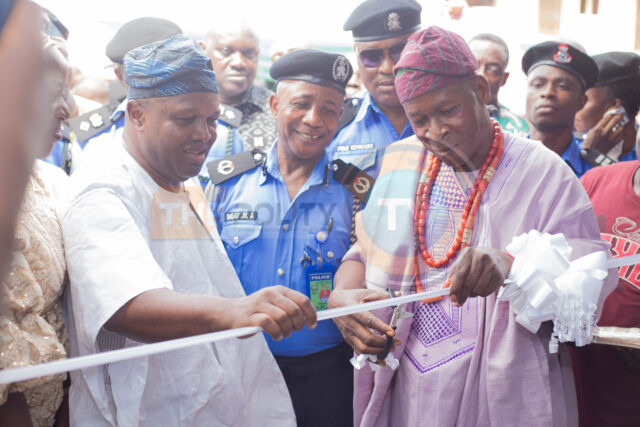 ….rebuilding the police station is a fufillment of my party manifesto – Tofowomo.

The Senator representing Ondo South at the Red Chamber of the National Assembly, Senator Nicholas Tofowomo has said he is delighted to have fufiled a major manifesto by rebuilding from the scratch the police station burnt to ashes in Okitipupa during the November 2020 Endsars Protest. The PDP Senator gave this indication at the Okitipupa Divisional Police Office during the official opening of the police station which he single handedly built from his personal purse. The Distinguished Senator Nicholas Tofowomo at the opening of the police station said while building the station from the scratch 7 million was budgeted but along the line , the budget increased to 12 million because of the inflationary cost of building materials and other sundry expenses.

He particularly thanked Chief Ibine, another PDP stalwart in Ondo South who shouldered the building project on his behalf and ensured it successful completion. He said there were proposal of fifty million, twenty million and all that but the cost friendly and pocket friendly proposal brought by Chief Ibine made the re construction of Okitipupa Police station a done deal for him.

The inauguration of the newly built station was graced by eminent People’s Democratic Party, PDP stalwarts in the Senatorial district among whom were, Hon. Fadope Senatorial Chairman of PDP, Hon. Ibine, Hon. John Mafo, two times Commissioner of sports in Ondo State among others.

In his welcome address, the Area Commander of Okitipupa Area Command ACP. Jimoh Salau thanked Senator Tofowomo for contributing to consolidating policing effort in the division by rebuilding from the scratch the police station in Okitipupa , which was razed by hoodlums during the Nov 2020 Endsars protest in the town.

Tofowomo in hi remark said today was his happiest day as he has achieved one of his election manifesto , which is strenghtening security in his Senatorial district. Senator Tofowomo who eventually had an exclusive media chat with thepolity. net said when the Endsars protest started he implored President Muhammadu Buhari to speak to Nigeria to douse the tension but the appeal fell on deaf ears and the protests across Nigeria went from peaceful to violence and arson.
He added that when the Federal Government came out with the list of places touched by the hoodlums to be rehabilitated, it was disappointing that no where in Ondo South was mentioned. Therefore , he had to take it upon himself to provide adequate security for the people of his senatorial district in Okitipupa whose police station were burnt down by the irate protesters. Senator Tofowomo clarified the fact that The Police station at Okitipupa which cost 12 million to execute was fund he coughed out from his personal pocket and not from the constituency fund, stressing that Constituency projects are captured in the budgetary allocation.
The Distinguished Senator while appealing to the Delegates of his party to vote for him during the party’s primary stressed that when he becomes a ranking senator in his second term in the Senate , he will be in a better position to attract more worthwhile developmental projects to the Southern Senatorial District of Ondo State.

On the issue of ASUU strike , Tofowomo said Senators cannot hit the street and protest like the students are doing but they are not happy with the situation and have implored both ASUU and Federal Government to meet again at the roundtable and consider the interests of the Nigerian students and their parents in their deliberations so that the strike can be called off. He however said the challenges facing the higher institution in Nigeria is as a result of the failure of the Federal Government to take tertiary education more seriously.