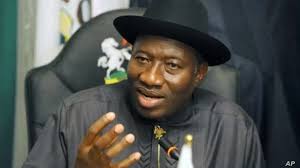 One thing you cannot take away from the peace loving former President of Nigeria and Otuoke born Ijaw son, now citizen of the world and global peace Ambassador , Dr. Goodluck Ebele Azikiwe Jonathan is his commitment to the continuity of the Nigerian project. The credit goes to him for successfully midwifing the 2015 transition programme even at the expense of his personal ambition and at the risk of seeing his party lose out without flexing any hidden or overt effort at manipulating the polls statistics even when it was obvious it was within his power to do such.

Goodluck Jonathan was known then for having streak of luck trailing his minor and major political endeavours. Every small steps he took in politics always opened up into a swath of land mine , juicy opportunities , talk about something about a name.

There are times in a man’s life when he would have to obviously look himself up in the mirror and ask frankly , ” does it worth it?” Such moment came for President Jonathan in the dying days of his administration when the question Providence and political circumstances posed at him was ‘ to be or not to be? ‘

The gentleman in Ebele Jonathan chose Nigeria and relinquished power in a situation that came like an anticlimax , proving the bookmakers wrong and showing to the whole world that among the breed of Niger Deltans, regardless of the agitations that had made the creeks people tick, the national question is not meant to be trifled with.
Jonathan had in the time he held sway as the President, the think tank group, The Cabal. He knows quite well the overreaching influence of this group. He once used them , he once listened to them and every Aso Rock occupier always has a need for them; it is the leveraging and overwhelming moving force behind the seat of power. The unelected third force which helps to direct government policies even for the elected mass representative of the people. So, when the subsisting cabal of the now, subtly reached out to Dr. Ebele Jonathan , the meek and soft spoken ex President would not have doubted their ‘ genuine intentions’ to have him recycled back into power as the President , Federal Republic of Nigeria.

Who would not want to break history as an ex President who returned to power with a trail of Goodluck having lost such golden opportunity once? The Cerebral academics and Doctor of Zoology fell for the Cabal’s bait of a schemed consensus arrangement in which he, Jonathan would be brought back to the All Progressives Congress and be crowned as the unbeatable heir apparent to the presidency ahead of the 2023 General election. To the dreamy and the ‘ unsuspicious of the grand intrigues in the ruling party ‘ the scheme smells of roses; more or less a done deal.
An authoritative source had revealed that the ‘ Jonathan Brought Back’ scheme was actually at the outset not a deception but a real politicking option that appealed to the Northern hegemons. Jonathan would do a term of one year , he would not be in the position to exceed a term as per the constitutional provision and he is a tested and trusted , meek and passionate gentle man whose words are his bounds , so if there are agreement to return power to the North he would not renege. His credential shows that as a Vice President to a Northerner , he was formidable , reliable , dependable , loyal and trustworthy , just the virtues the cabal wanted are all embedded in Jonathan’s political DNA. So , he was chosen and became beholding to the cabal on the Rocks who were all on the same page with the oligarchs who wanted power rotated back to the North in just four years, for them to have an irrefutable eight year run for the presidency again.

The Cabal didn’t factor the agitation of the South for a power shift; they probably overestimate the underpinnings of the loud but moderate groaning for zoning or rotational presidency.

However, a more disturbing outcome of the subtle invite to Goodluck Jonathan by the cabal was that this development denied him his pride of place in PDP national convention and Presidential primary. The authoritative source added that while it was not a ploy to stop Jonathan from attending the PDP primary, nobody with his eyes on the presidential ticket of APC will be perturbed by PDP’s convention.

Putting it differently, the cabal made the ex President to stand his legs wide , neither here nor there. That’s where it began to look like a deception. The former President neither made it to PDP convention nor APC’s primaries. Whereas , his presence at the PDP primary would mean so so much as he would be accorded the honour of a national leader in attendance.

Politics can faze even the best of political tactician; moreover , when a politician is desperate for a vacant position , logic and outright summations are put on a hold.

How could he have thought it would be a smooth sailing for him to hijack the structure from those who had lurked in the wings for eight donkey years? What would have been his campaign lingo as an APC Presidential candidate? Did he think of what PDP , the party on which wing he berthed and ruled would have said about him?

Reno Omokri, his spokesperson , now a Diasporan was neither here nor there about his Principal’s move and that was understandable. Should the move had worked, it would have sent the bookmakers back to the classroom!

It is only the regular Nigerian politician that can take hook, line and sinker, the ‘ Cabal’s bait to Goodluck Jonathan. ‘

Be that as it may, ‘ nothing spoil’ that is the popular street lingo in Nigeria to shrug off a disappointing outing. The Cabal threw him. a red herring and it was so tantalizing a bait that he tripped ; ” but nothing spoil’! ‘

After all, the former president who thundered way back in his meek voice, ” the election is not worth the blood of any Nigerian,” still remains a global peace making citizen of the world. That is a million times better than being Nigerian President fleeting like yo-yo from the PDP to the APC.

May Dr. Goodluck Ebele Jonathan live long to add his voice to the polity in Nigeria, nay the world as a global citizen. May other politicians learn too that the cabal can approbate and reprobate in one breadth.

It has been an interesting and intriguing six weeks of politics in Nigeria.